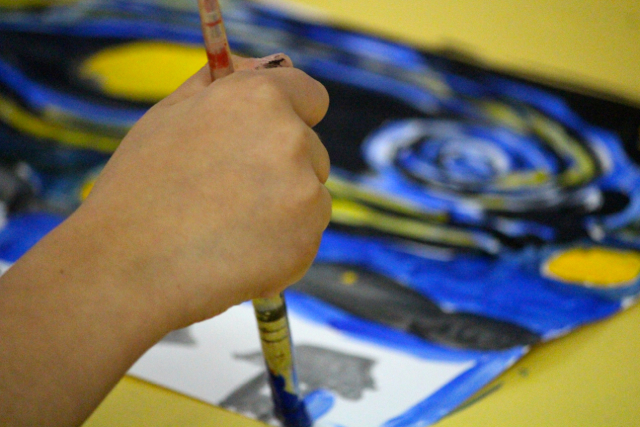 Arguably the Dutch artist’s most famous work, The Starry Night resides in The Museum Of Modern Art in New York but its sinewy brush strokes and nocturnal colours were very much alive in Grades 4, 5 & 6 this past week. Coming to the end of our unit examining cites and their characteristics, the students took time out on Friday to explore, what is actually, a pre-dawn landscape that has enchanted many for over a century.

Discussing the notions of texture and movement, the students were fascinated by the effects Van Gogh was able to create in the heavens he depicted. They enjoyed mixing colours, both on their pages and their palates, before rendering their own interpretations of the post-impressionist’s viewpoint. Their swirling skies and stellar swipes can be seen in the photo-essay that follows; their expressions of absorbed concentration a characteristic that Vincent embodied and would have surely endorsed as desirable in young artists.

Peek in the Lotus Cottage