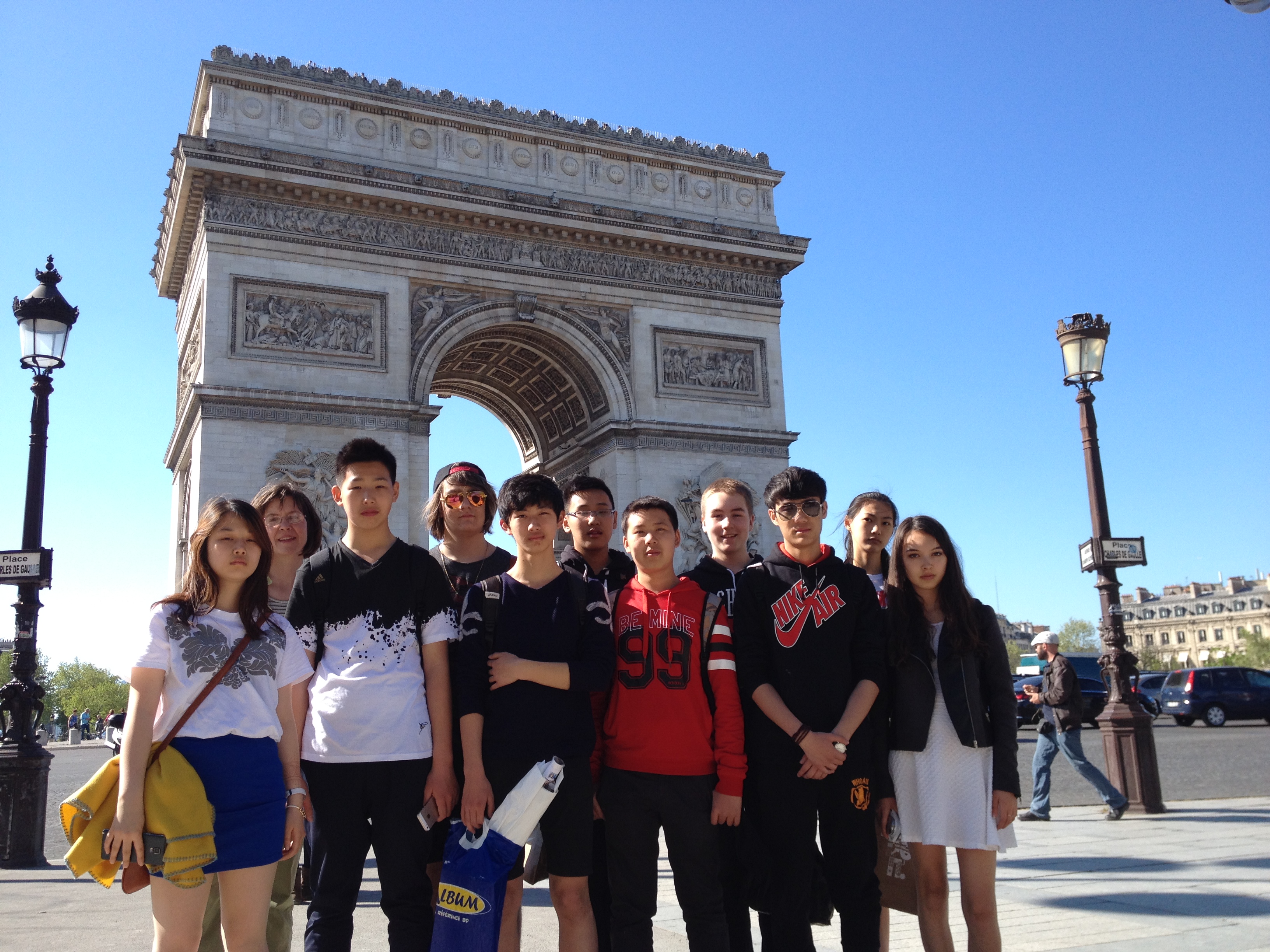 Once upon a time, April 17, 2015, ten QAIS high school students and Ms. Jacquie, Ms. Emilie, and Mr. Jeff left Qingdao on a school trip to Paris, France.  This is the story of our journey that reads like a magical tale of interest and fun.  The first day was devoted to arriving in Paris by flying Air China.  Due to the time difference, April 17 was a 30-hour day for us!

On the second day, our group woke up early to catch a bus to the beaches at Normandy.  It was a day of unusuals.  It unusually windy.  It was unusually cold for this time of year.  It was unusual that our tour bus broke down three hours out of Paris.  We joined other tour busses to complete our trip.
We saw German bunkers and original craters left by Allied bombing raids.  It was a peaceful day spent with people from around the world. 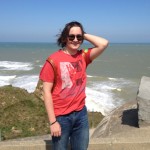 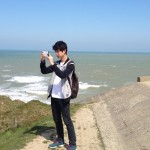 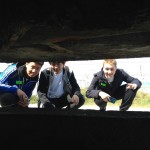 On Sunday morning, we watched an hour-long movie introducing us to Paris called The Paris Story.    Then we toured  the Garnier Opera House, which was extravagant.  We walked to Notre Dame, saw the archaeological crypts, and then visited a real bookstore where we could buy books made out of paper (how quaint!).    On our way to pick up tickets for a boat ride on the Seine, we were so near  the Eiffel Tower, we took the opportunity to go to the very top floor and watch as the day slipped away into evening and the city lit up before our eyes.  It was magical!

On Monday morning we went to the Louvre.   Afterward, we went to Montmartre where we saw Sacre Coeur church and rode the petit train.  We took an evening  boat ride on the Seine River and ate Ms. Jacquie’s favorite ice cream, located near the Eiffel Tour.  We finished our night by singing Happy Birthday to her in a Middle Eastern restaurant and eating a Bavarian birthday cake.

Tuesday began with a long commute to Versailles.  We saw the palace at Versailles and walked the sculptured gardens.  Afterward, we ate at a small café.  Notice the picture with the Tsingtao Beer truck in the back.  It was funny to see that in France!
In the afternoon we saw the Concierge, a former prison where Marie Antoinette was held.  It was more fun getting in than the actual building.  The students wanted to shop for themselves and for their families, so each group found its own way to the Galleries Lafayette, a large shopping mall.  Later that evening, on our way to the Latin Quarter for a stroll through the neighborhood, we walked past Notre Dame as the sun was setting.  Beautiful!

What did we do on day six?  The students chose to go to one of the following three museums:  the D’Orsay Museum (impressionistic art), the Museum of Music, or the Museum of the History of the Middle Ages.    After lunch, we all went to a museum about the sewers of Paris and then a  to a museum where we learned about chocolate and tasted some different types.  We walked down the Champs-Elysees to the Arc De Triomphe, climbed the stairs to the top, and saw a fantastic view of Paris and its tree-lined streets.  We had dinner on the Champs Elysees and then went to the Pompidou Art Center.  Most of the Center was closed, but the ping pong tables in the basement beckoned us to play several games.

On Thursday, our magical trip led us to the Magic Kingdom:  Disneyland Paris.   Four students had been to a Disneyland park at some part of the world, but for most of the students, it was a new experience.  There were not many pictures to share today because we were off in our own groups exploring the park.

Our last day in Paris was a treat.  We began the day at a bakery across the street and had a quick breakfast there.    We visited the L’Orangerie Museum , where we saw numerous famous painters’ works on display and many of their pieces:  Cezanne, Renoir, and  Monet.  Monet actually designed two galleries himself and painted large murals for the walls about 100 years ago.
We visited the Rodin Museum, and again, we were blown away, even though most of that museum was closed for renovations!
We were planning to see the Catacombes, but there was a two-hour wait in line, so we headed back to our hotel for our luggage and left for the airport.
Paris was a fabulous international trip.  I thank the students for being so thoughtful to each other.  I thank Jacquie and Emilie for being 24-hour chaperones with me.  April in Paris created magical memories for all of us. 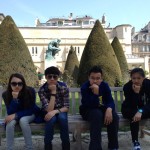