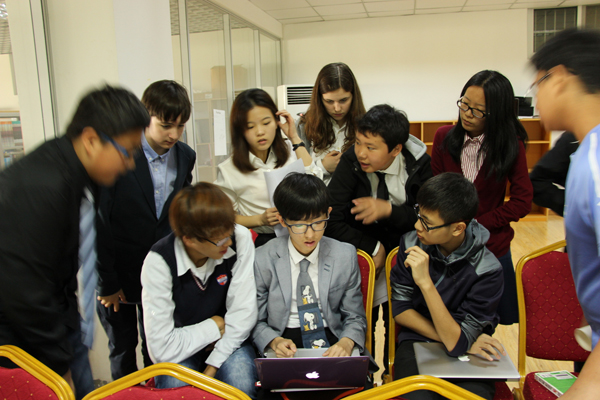 Stimulated by their experience at Harvard MUN earlier this year, our Model United Nations group worked with Student Council to develop our own MUN event here at QAIS over two days last week! The students chose nuclear weapons and juvenile justice as their topics, and, representing countries around the world, they debated, wrote, and passed a resolution about nuclear weapons. Sarah Ryou (Grade 9) served as Chair for the meeting.

The proceedings were ‘interrupted’ by breaking news of Middle East Respiratory Syndrome (MERS), featuring students in roles as reporters, experts from the Centers for Disease Control and Prevention, and eyewitnesses. In this segment, participants had to respond to an urgent issue, again in their roles as representatives of different countries.

In keeping with MUN tradition, students also purchased roses and other gifts for one another, and sent notes and proclamations, with proceeds going toward their Jimo School project. In all, the students had a terrific session, and we look forward to doing it again next Fall!